Take center stage with a unique cast of characters and make your way to become a Grandmaster of the theatre. Perform solo or battle a friend in a veritable variety show of game modes and skits. Whether you are a one-puppet show or sharing the stage, above all else, show the world you are the best performer on the shadowy screen. 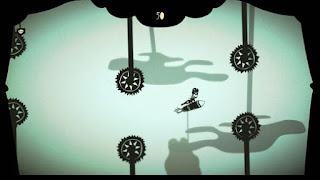 Story – Find out what it takes to keep a last-of-it’s-kind shadow puppet theatre in business.

Marathon – Survive the gauntlet and become a Grandmaster.

Improv – Quick play by yourself or with a friend, selecting the cast, stage and direction of the shadowy fight. Direct the Improv fights with a selection of gameplay variations, limits and more.

Skits – a proverbial vaudeville of mini-games set to delight and distract.

Robots, Giraffes, Pirates and more! An eclectic cast so big we needed a larger dressing room!

Behold the power of paper cutouts on sticks and string, and their uncanny ability to set the stage and tell a story. The magic of the theatre!

A collection of musical notes played specifically for this game! 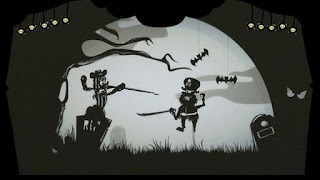