You will start with nothing but a scanner and a mining laser in the location of your choosing — either by yourself or with your friends, then venture forth to find resources, build outposts, research technologies and ultimately claim the world as your own. 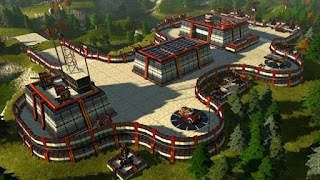 Exploration is the core part of Sightseer. As you venture forth into the vast world, you will travel across dozens of scenic biomes, discover natural resources, strange artifacts, find discarded upgrades, and (depending on your chosen world configuration) other denizens that chose to exploit its bountiful resources.

Once you find a nice spot you wish to call home, you can claim it by building an outpost. From simple automatic resource extraction satellites to sprawling, heavily-defended main bases, it will be up to you to turn it into something you’d be proud of.

Outposts will not only extract resources for you, but they can also perform scientific research, unlocking new technologies, vehicles, parts, and structures. Furthermore, outposts built near artifacts will offer additional powerful technologies that can potentially improve all vehicles belonging to the player’s faction.

As your grasp of technology grows, you will unlock new vehicles, along with weapons and other components to customize them with. All vehicles have a role, but it’s up to you how to customize them to your own play style. Will you choose to emphasize stealth in a fast, agile race car that gets stronger the faster it moves, or will you choose to take to the skies in a heavily shielded flyer? Or perhaps a sturdy, dependable 8-wheeler with extra threat to draw enemies attention along with ample hull self-repair modules and an assortment of weapon attachment points is more to your liking? Then there are the various weapon types to choose from — lasers, miniguns, cannons, plasma, missiles, railguns — they all have their advantages and disadvantages that will unlock new designs as you use them.

Sooner or later, you will need to defend what you’ve built — whether it’s from opportunistic pirates, or other players (if playing on a PvP server). The easiest way to get your wheels wet is to run combat simulations — virtual scenarios that won’t cause you to lose anything. As you get better and gain upgrades, you will be able to customize your vehicles further, and will be even better prepared to face the world’s enigmatic protectors, as well as their ultimate chief.

…or you can just join a cult and worship one instead.

Do you stream on Twitch? Engage with your community using Sightseer’s rich built-in Twitch integration, allowing your active (chatting) viewers to influence the game’s events, often in rather hilarious fashion. Simply enable this feature in the game’s options and have them use the !p5 command for more details. 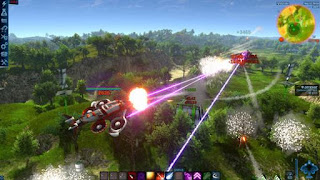