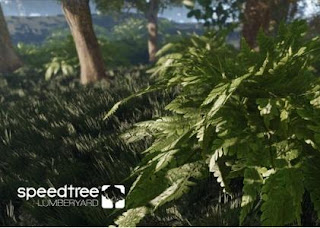 IDV, Inc has released an update to SpeedTree 8 for UE4 Subscription, is a powerful toolkit used to create 3D animated plants and trees for games, animations, visual effects and more.

-Modeling with mesh forces (e.g. grow trees around or through 3D meshes)

The scripts for the following DCC application and renderer combinations have been updated and/or added in this release:

-When a mesh asset is loaded and other meshes named similarly with a number convention are found in the same location, those meshes will be loaded and assigned as LOD meshes for the asset automatically.

-The Wind Wizard now works in conjunction with the SDK wind algorithm.

-Legacy models exported with this wind style no longer push the palm fronds straight up. In addition, the Modeler no longer displays leaf motion for this wind preset.

-The weld region on branches welded to meshes via “Target” generators were not getting the correct material assignment on export. This bug has been corrected.

-Alembic models imported into Houdini for use with the Principled renderer now show leaves as expected.

-Procedural branches converted to hand-drawn branches and then saved would often not load correctly. This bug has been fixed which means that all subsequent saves will work and not look different when the file is loaded; however, the original data is lost so the branches may need to be edited back into position.

-A bug has been fixed that could result in errant wind computation in Linux releases.

-Recent releases have had this feature disabled, it is available to Unity users as of this release.

-This property (part of the legacy “Spine” generator) works as expected as of this release.

-A value of zero for the “Knot” generator property “Inner:Size %” could result in vertex normal and rendering errors at the center of the knot. This bug has been corrected and zero is a valid value.

-Models that utilize collections are currently not able to have animated growth. Users are now notified of this fact if the two features are both in use on the same model (growth becomes disabled).

-A bug has been fixed that cause “Mesh” objects to change their orientation each time they are clicked when the transform gizmo is active. Only objects with procedural rotations were affected.