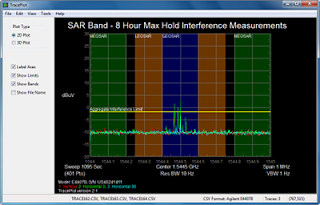 TracePlot is a tool intended for the use of professionals, and student, involved with the testing of radio and satellite communications systems.

TracePlot is an easy to use tool to display diagrams from spectrum analyser CSV trace files.

Modern spectrum analyzers and other electrical test equipment usually include a way to save the measurement data to a computer file for later processing. In older units this may simply be an image file showing the screen image from the device. However, most modern units also allow saving the actual measurement data to a CSV (comma separated values) file.

For a single CSV trace file, or a small number of files, it is quite easy to load them into a spreadsheet program and generate simple charts.

Each model of spectrum analyser produces a CSV trace file of slightly different format. TracePlot has built-in data for a couple of these units from Agilent and Rohde&Schwarz, but it also allows the user to add their own custom trace file format specs, to allow TracePlot to quickly read the correct information from the user’s own CSV trace files.

TracePlot also includes a tool to merge separate trace files. For example, when testing for spurious emissions compliance across a 500MHz band, it is not sufficient to measure the full band in one sweep. In order to accurately determine compliance, it is necessary to sweep the band in smaller individual segments. For example, an automated process can be set up to measure each 5MHz segment of the full band. However, this produces 100 individual trace measurement files. TracePlot allows those 100 individual sequential files to be merged into a single CSV trace file, with 100 times the measurement points of a normal trace file, which may then be plotted by TracePlot, or loaded into a spreadsheet for further analysis, as desired.