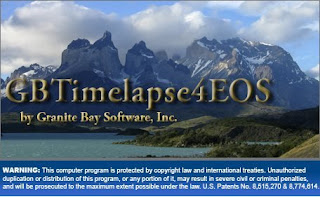 In time-lapse photography a series of images is taken at regular time intervals and then played back faster – giving the illusion that time is passing quickly. By using a Digital SLR camera you aren’t limited to the low resolution of a standard-definition video camera or web camera. Instead of low resolution you can capture high resolution images and create high-definition video files in HD, 2K or 4K resolution.

GBTimelapse is a Microsoft Windows application for the capture of time-lapse image sequences. You control a Canon EOS digital camera tethered to your computer by a USB cable. Using the camera’s settings, you capture images using the computer rather than the camera controls and collect a series of images automatically. Watch a video of your time-lapse in progress and make changes as needed.

Capturing time-lapse image sequences for video and film: Typically you are on location in the field using a battery operated camera tethered to a laptop or netbook computer. Normally both the laptop and camera can run for several hours on a fresh battery charge.

Periodic photographic images can be captured over a period of days, weeks or months to document the progress of a project. The camera and computer use power from a uninterruptible power supply (UPS) and can run indefinitely. Progress is monitored by email alerts from the capture software or by remote access software. Images can be emailed periodically or uploaded via FTP. Other software can be used to convert the images sequences into time-lapse video.

The Pro Version of GBTimelapse brings you all of the powerful videography features of standard version, plus the ability to perform robust, long term time-lapse operations, even under remote access conditions.

Long term photography can be automated over a period of days, weeks or months. Laboratory photography may be in lab or shop setting with the camera being used to document the progress of an experiment or process. Operation is unattended and the user may or may not have access to the computer and camera.

– Schedule a program for any time of day or night any day(s) of the week.

– Resume operation after a power failure.

– FTP File upload: Upload images to your FTP host computer as they are captured.