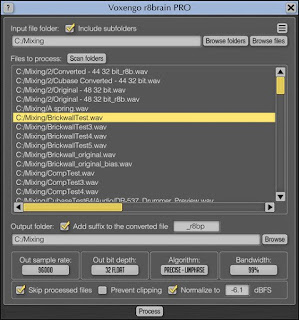 Like many existing SRC algorithms, r8brain PRO offers you a linear-phase conversion mode. But more importantly, you also have an option of using the minimum-phase conversion mode, which finally brings SRC with true analog qualities to affordable digital audio workstations: in this mode, r8brain PRO works like an ideal digital-to-analog converter followed by an analog-to-digital converter to resample the audio. This eliminates pre-ringing associated with linear-phase designs, while introducing a minimal amount of phase coloration.

r8brain PRO’s bit-depth conversion uses an industry-standard “flat” TPDF dithering. We have decided not to implement noise-shaping dithering because audio production software available on the market usually offers the user a noise-shaping dithering of some kind already (you can also use our Elephant plug-in for this feature). We also based our decision on the fact that the sample rate conversion process often adjusts peak structure of the original program material, thus, in many cases, making a subsequent peak-limiting a necessity. To prevent output audio from clipping we have implemented a level normalization feature.

Wave64, AIFF support (on input only)

This software is compatible with Windows (64-bit Windows 7, 8, 10 and later versions) computers (2.5 GHz dual-core or faster processor with at least 4 GB of system RAM required).